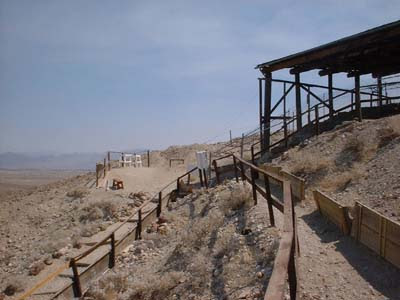 On Interstate 15 from Barstow to Las Vegas in the Mojave Desert is an Archeological work in progress. After driving a few miles up a dirt road and going through the exit of the Camp I found myself at the foot of a trail. This part of the Mojave was once called Lake Mannix but is now so alkaline and dry, that absolutely nothing could possibly live here. The site is so inhospitable that they can only dig in the winter months. What they have found here are what people believe to be the earliest evidence of tool creation in North America. They find these tools six feet under the rocks and sand. Many of the pits that are being dug are covered because of the heat. They are dug in three foot cubes or matrices. 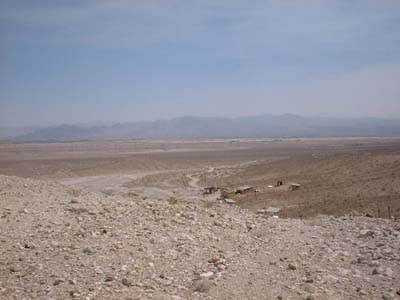 Some believe there is evidence of man being here 200,000 years ago. No human remains have been found on the site yet, and I was told by the one Park Ranger who was fixing his refrigerator when I showed up, that all they would probably find is teeth anyway, because the ground is so alkaline, that it dissolves bone and anything else that is organic. You get the feeling it is probably a matter of time before something extraordinary is found here which will change history.

Dreams of JD and the Revolution of Science